June 26th, PWG’s “Mystery Vortex III” at American Legion Post #308, Reseda.  Many celebrities, including TV Actress Sofia Vergara, helped fill another capacity crowd, braving the early summer heat along the way.  As it was with the previous two editions, noone had any real clue to who was facing who, until they came out to the ring.

1 – “The Psycho Shooter” Tommaso Ciampa p. Johnny Gargano
Great opener that ended with Ciampa hitting the Lift-and-Drop Backbreaker to the Knees (his version of Roderick Strong’s “Orange Crush”) for the pin.

2 – The World’s Cutest Tag Team (Candice LeRae & Joey Ryan) def. The Monster Mafia (Ethan Page & a retiring Josh Alexander)
MM really went all out in what is certainly one of Josh Alexander’s last wrestling matches.  Josh went for something big on Candice LeRae, but ate Joey Ryan’s Superkick from the apron, allowing Candice to hit the Headscissors DDT for the pin.

3 – Biff Busick scored a tapout sub. on Timothy Thatcher
Easily the most technical match on the card.  Biff eventually put Thatcher in what looked like a Modified Sleeper hold that he wasn’t able to get out of, scoring the win.

4 – Roderick Strong successfully defended the Heavyweight title against “Speedball” Mike Bailey
Roddy almost got one-shotted by Mike, but was able to fight back.  It took him 1 Sick Kick, a Stronghold, and 3 Orange Crush Backbreakers to put away “The Speedball”, in what was another clean win for the heel-playing veteran.

5 – Brian Cage p. John Silver
Great display of strength by the two men, but Cage was able to put Silver away with the Discus Lariat for the pin.

SM – Zack Sabre, Jr. scored a sub.win on Chris Hero
This was another very technical match, mixed in with some great combination moves, and plenty of counter-wrestling.  Zack picked on both of Hero’s arms throughout the match, even bloodying the big man’s left hand.  He later went on to put on what looked like a Modified Bow & Arrow hold, which allowed him to stomp the back of Hero’s head repeatedly, until he submitted.

M – SCU’s 2014 “Tag Team of the Year”, The Young Bucks (Matt & Nick Jackson) regained the Tag Team titles from Andrew Everett & Trevor Lee
An expected spot-fest.  There weren’t alot of underhanded moves by the brothers, just perfect timing with their Superkick Party, capped with the Meltzer Driver on Trevor Lee for the pin, with some help from Roderick Strong after Nick Jackson Superkicked Referee Rick Knox.  For a moment, it looked like Roderick Strong & The Young Bucks were forming a new stable.  WRONG!  Super Dragon hits the ring.  Was he going to confront Roddy?!  WRONG!!!  He goes on a Psycho Driver rampage, starting with Referee Rick Knox, then Candice, then Trevor.  He even put Excalibur in a Superkick Party/Curb Stomp combo! 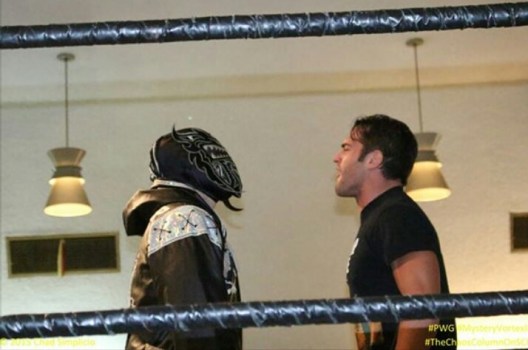 I wonder what Kevin Owens in WWE, and Adam Cole in ROH are thinking right about now, as news of this swerve echoes from Reseda.  Then again, PWG fans should always expect the unexpected, when the whole card is a mystery.  The new Mt. Rushmore 2.0 tees were an instant hit with the fans, too, so it’s all good on the business side of things.  Who knows what will happen going forward, with “Threemendous IV” next month, and BoLA in August, especially when Reseda…”experiences a Lucha Underground Invasion”.  If Excalibur isn’t available to do DVD Commentary later in the summer, could we get Vampiro & Matt Striker to fill in?

For more photos of the show, please visit my gallery.

Events Calendar:
A list of pro-wrestling and MMA events happening throughout Southern California.